Today is an important moment for the International Churches of Christ (ICOC). As the movement enters its second generation, understanding our history, our strengths and our weaknesses, has never been more vital. Although God’s word has world-transforming power and he desires for the whole world to be saved, there seems to be internal resistance impeding a gain in momentum and forward motion. I believe that part of this resistance can be attributed to lack of faith and discouragement, and self-focus rather than God-focus. At this moment, in this situation, we need the faith of Abraham as much as ever:

“Against all hope, Abraham in hope believed and so became the father of many nations, just as it had been said to him, ‘so shall your offspring be.’ Without weakening in his faith, he faced the fact that his body was a good as dead—since he was about a hundred years old—and that Sarah’s womb was also dead.” ( Rom 4:18-19 )

That our movement has slowed in growth is a fact, but that does not change what God is able to do through our faith and faithfulness. What God wants to be done in this world, can only be done through his strength and wisdom.

From 1979 to 2002, the ICOC grew from a single congregation of about 30 members to a worldwide fellowship of 439 congregations and 135,072 members. Although the growth was perceptibly slowing in the latter part of this period, the organizational collapse and loss of membership in 2003 were severe and largely unanticipated by the leadership. The purpose of this in-depth statistical analysis is to examine the available data of this “initial growth phase” and look for trends and patterns that might have served as indicators and warnings as to what was about to take place. Some of the most significant findings of this study can be summarized as follows: 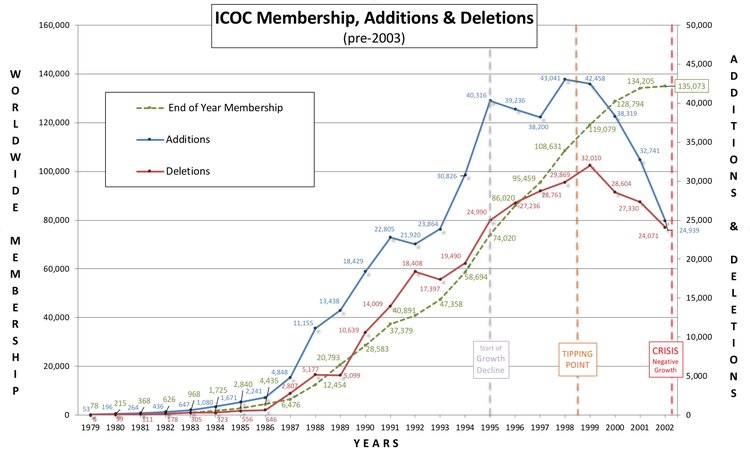 This knowledge doesn’t change the facts or the past, but gaining insight into past failures and challenges can help us dream and plan more effectively as we move forward in faith. It’s time for a new generation and new growth phase for the ICOC, and the priorities are still clear: “Seek first his kingdom and his righteousness, and all these things will be given to you as well.” ( Matt 6:33 )