The Evangelist Service Team (EST) has been hard at work during 2017 on many projects. We met together twice (Dallas and Chicago) as well as many phone calls, emails, etc., organized several projects and are excited about what God may bring in the next few months.

ICOC 3.0 – Our main focus has been ICOC 3.0 this year. At our annual Spring Leadership Meetings of the Evangelists, Elders, Women, Chairmen, Teachers and Administrators Service Teams in Dallas, a set of 20 questions got us talking around the world about the ICOC and our direction going forward. The meeting went so well we asked for input from the leadership of our 34 families of churches. 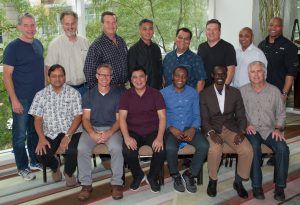 Roughly 2500 brothers and sisters participated by praying, discussing and giving feedback on some simple questions about what direction we should go as a fellowship. This led us to appoint five Task Forces led by trusted brothers around the globe who presented viable concepts at the annual Delegates Meeting in Chicago in October. After much prayer and open discussion of these five key topics, votes were taken to give the Task Forces direction on which ideas to develop into specific proposals for 2018.

These proposals will be discussed by the service teams in Orlando in March of 2018 and then sent out for discussion and input from all Delegates and church leaders. Lord willing, we will all vote on these proposals in Panama at our Delegates meeting in October 2018. Here are the five topics:

Structures – This topic certainly had the most interest in Chicago. Three proposals are being drawn up for presentation in Orlando. The three proposals address the delegates, a steering committee, and making our structures more effective.

To see video of all the messages in Chicago, click here.

Besides ICOC 3.0, the EST is also busy organizing events like the upcoming World Discipleship Summit in Orlando. The EST also is working hard to organize and help our Mission Societies. In collaboration with the other Service Teams and Chairmen, we plan the program for the annual Spring Leadership meetings and the annual Delegates Meetings and the bi annual International Leadership Conference.

In the midst of such an ambitious agenda, we in the committee would humbly ask for your prayers as we press forward in service of our Lord.