The Elders Service Team organized itself into subcommittees (see list below) at the beginning of 2017 to provide clearer focus on its work. Since then various committee members have: 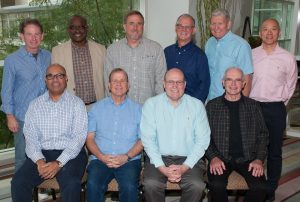 In addition, though he has been limited regarding travel, Wyndham Shaw has participated and been instrumental in our monthly conference calls.

On the personal side of things, a recent tally shows that thirteen couples on the service team together have forty-five children and seventy-eight grandchildren, with twenty-two of this third generation having been baptized so far. We praise God for his continued blessings!

Finally, during the last quarter of this year the Elders Service Team is now beginning work on drafting a book on elders and the eldership in the hope that this can be a resource for churches in the future. The service team continues to strive to help establish elderships around the world.

*Became an emeritus member of the service team mid-year