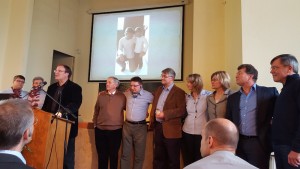 February 25, 2016 — As usual for disciples, 2015 was a year of testing and blessing for the Elders Service Team. Two of our couples in particular faced health challenges that forced Gloria Baird to endure a new round of chemo therapy and Wyndham Shaw to take a three-month health sabbatical. Both couples missed the October North American delegates and service team meetings. We ask for prayers and God’s grace for our group as we strive to serve him and allow his power to work through us.On the blessing side, some in our group saw new grandbabies born and joined the “grandparent club.” There were six new grandbabies born among us in 2015, making a total of 72 grandchildren in the group. The Kims, Evans, Craigs and Brushes all had new grandbabies. (No twins were born if you are doing the math. The Evans and Brushes share mutual grandchildren.) The Shaws saw their oldest grandchild baptized and the Bairds, Craigs and Brumleys saw new baptisms —16 of our grandchildren are disciples!

“He is the faithful God who keeps his covenant for a thousand generations and lavishes his unfailing love on those who love him and obey his commands.” — Deuteronomy 7:9

Already over 13,000 are registered for Reach2016 in St Louis. The Marriage and Parenting track has been planned over the last year and promises to be another inspirational and biblical menu of choices. At reach2016.com you can see the topics for a wide range of needs with qualified speakers from many parts of North America. Thanks to Sam and Geri Laing for chairing the sub-committee on family!

New elders and elderships in the ICOC are a primary goal of our committee. We are especially prayerful about seeing appointments outside the US. It has been encouraging to see elders appointed in Milan, Italy, Paris, France, and Munich, Germany, in the last two years. Fabio Birondi and Marco Fortina were appointed in Milanand now serve with a young evangelist and woman’s ministry leader to shepherd and oversee the church, which has seen steady growth for the last seven years. Pierre Cariven, Brad King, Yannick Le Noan and John McGuirk were appointed in Paris where John and Carol McGuirk also serve as evangelist and women’s ministry leader. The Paris Church of Christ has grown from about 60 to 150 in the last three years.

Also in Europe, the Munich Church of Christ appointed Stephan Kallus and Steve Krater as new elders to oversee and shepherd the church (which recently merged two memberships from previously existing congregations)! The two new elders each came from one of the previous groups serving to better unite the one church in shared convictions, mutual respect, and Christ-like love. The Munich church now has a membership close to 150 disciples. Training continues for elders and elderships in Kiev Ukraine, Lyon, France, and other international cities outside the US. Our 2020 goal is to see over 220 elders in nearly 100 churches when by faith we meet for the World Discipleship Summit in Orlando, Florida!

Peacemakers are commended by Jesus in Mathew 5:9, and our team has a sub-committee devoted to conflict resolution. Walter Evans continues to do a great job chairing this sub-group and the Delegates approved a Conflict Resolution Protocol published on Disciples Today. The process starts within the local church, then the regional family of churches, and then appeals for Elder Service Team help if situations remain unresolved. This process continues to be used around our worldwide fellowship.

Finally, last year the elders successfully initiated a best practices staff retirement proposal which was assembled and submitted by the Communications and Administration Service Team to the proposal process. After global review and input, these best practices were adopted by the delegates and recommended to be initiated in our churches wherever possible.